Since the 1980’s cognitive behavior therapy (CBT) has been developed and tested with adolescents experiencing depression. Early studies demonstrated that CBT was more effective than no intervention for young people with depressive symptoms. Beginning in the 1990’s CBT has been proven to be efficacious for adolescents with diagnosed depressive disorders, specifically Major Depressive Disorder (MDD). A series of increasingly challenging and methodologically rigorous trials showed that CBT was an effective intervention for mild to moderate MDD, and enhanced the benefits of anti-depressant medication, even for those adolescents who had already failed to respond to an initial medication. Simultaneously, some limitations of CBT were suggested by these studies. Results of CBT alone were not encouraging with severely depressed adolescents, and the combination of CBT plus medication was not uniformly supported. As CBT investigators worked with more challenging, complex clinical cases, such as depressed adolescents who were abusing substances or engaging in suicidal or self-harm behaviors, standard components of CBT were augmented by increased emphasis placed on emotion regulation, safety planning, and by more intensive outpatient treatment models. Newer developments include “third wave” models, which have shown initial promise. 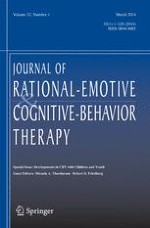 Using a CBT Approach to Teach Social Skills to Adolescents with Autism Spectrum Disorder and Other Social Challenges: The PEERS® Method

We’ve Come a Long Way, Baby!: Evolution and Revolution in CBT with Youth

The Emerging Role of Technology in Cognitive–Behavioral Therapy for Anxious Youth: A Review

To Infinity and Beyond!: Introduction to the Special Issue