With the Standards voicing concern for the appropriateness of response processes, we need to explore strategies that would allow us to identify inappropriate rater response processes. Although certain statistics can be used to help detect rater bias, their use is complicated by either a lack of data about their actual power to detect rater bias or the difficulty related to their application in the context of health professions education. This exploratory study aimed to establish the worthiness of pursuing the use of l z to detect rater bias.

We conducted a Monte Carlo simulation study to investigate the power of a specific detection statistic, that is: the standardized likelihood l z person-fit statistics (PFS). Our primary outcome was the detection rate of biased raters, namely: raters whom we manipulated into being either stringent (giving lower scores) or lenient (giving higher scores), using the l z statistic while controlling for the number of biased raters in a sample (6 levels) and the rate of bias per rater (6 levels). 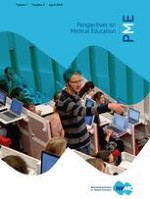 The learning environment and resident burnout: a national study