While control-related cognitions have often been implicated in discussions of Obsessive Compulsive Disorder (OCD), empirical investigations of the relationship between control-constructs and OCD symptoms have been relatively limited. In this article it was hypothesized that OCD symptoms may be linked with a higher desire to control (DC), but a lower sense of control (SC) over the self and environment, leading to motivation for compulsive symptoms. This hypothesis was investigated in an analogue population, using regression analyses controlling for depression and anxiety. Consistent with predictions, it was found that higher levels of DC and lower levels of SC were associated with higher levels of OCD-related beliefs and symptoms. While control cognitions were linked with the OCD-related beliefs of perfectionism and the over-estimation of threat, they did not relate to cognitions concerning the importance of/need to control thoughts. With respect to specific OCD-symptoms, control cognitions were most strongly related to contamination obsessions/washing compulsions. Implications for theory and treatment are discussed.
vorige artikel ‘Jumping to Conclusions’ and Attributional Style in Persecutory Delusions
volgende artikel Negative Life Events, Self-Perceived Competence, and Depressive Symptoms in Young Adults 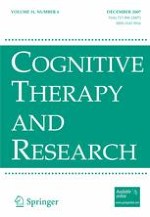 ‘Jumping to Conclusions’ and Attributional Style in Persecutory Delusions