Depression and ADHD-Related Risk for Substance Use in Adolescence and Early Adulthood: Concurrent and Prospective Associations in the MTA | mijn-bsl Skip to main content
ZOEKEN MENU 1 2 3 4

Childhood attention-deficit/hyperactivity disorder (ADHD) is prospectively linked to substance use and disorder. Depression emerging in adolescence is an understudied risk factor that may explain some of this risk. In the present study, we considered mediating and moderating roles of adolescent depression in explaining this association by using longitudinal data from the prospective 16-year follow-up of the Multimodal Treatment Study of ADHD (MTA). Participants were 547 children diagnosed with DSM-IV ADHD Combined Type, and 258 age- and sex-matched comparison children. In adolescence, depressive symptoms did not exacerbate effects of childhood ADHD on any substance use. For both groups, time-varying and average depressive symptoms were associated with more frequent use of all substances. Prospectively, we found no evidence of depression mediation to adult substance use. However, adolescent depression moderated the association between childhood ADHD and adult marijuana use. Although adults without ADHD histories used marijuana more frequently if they had elevated depressive symptoms in adolescence, marijuana use by adults with ADHD histories was independent of their adolescent depression. In adulthood, depression diagnoses and ADHD persistence continued to operate as independent, additive correlates of substance use risk. Our findings suggest a circumscribed role for depression in substance use risk that adds to, but does not alter or explain, ADHD-related risk.
vorige artikel Reinforcement Contingency Learning in Children with ADHD: Back to the Basics of Behavior Therapy
volgende artikel Adolescent Psychopathic Traits Negatively Relate to Hemodynamic Activity within the Basal Ganglia during Error-Related Processing 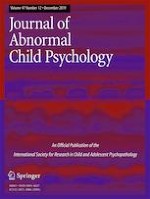 Parenting and Youth Onset of Depression Across Three Years: Examining the Influence of Observed Parenting on Child and Adolescent Depressive Outcomes

Observed Personality in Preschool: Associations with Current and Longitudinal Symptoms