It has been argued that if rational emotive cognitive behavior therapy (RECBT) is to survive and prosper in the present century, the personality theory underlying it requires further development, greater clarification, and more comprehensiveness. In this article it is argued that RECBT personality theory could be further broadened and strengthened by attempting to incorporate the classic defense mechanisms of psychoanalytic theory via stripping them away from Freud’s hypothetical dynamic unconscious and instead resting them on Ellis’s concept of the unconscious. First, to provide proper context, the unconscious and the defense mechanisms are briefly discussed. Then attention is turned to the 10 classic defense mechanisms, discussed one by one. In each described mechanism, the mechanism in question is defined, then placed in the framework of RECBT personality theory along with ample examples. Then the clinical implications of each mechanism are briefly explored, with RECBT practitioners in mind. It is hoped that this discussion will, in some way, help to broaden and strengthen RECBT theory and practice.
vorige artikel The Albert Ellis Institute: Past, Present and Future 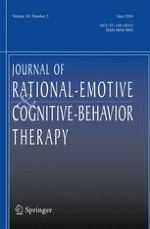 The Albert Ellis Institute: Past, Present and Future

A Brief Report on the Assessment of Distress Tolerance: Are We Measuring the Same Construct?