The GDS-8; a short, client- and user-friendly shortened version of the Geriatric Depression Scale for nursing homes The objective of this study was to construct a patient- and user-friendly shortened version of the Geriatric Depression Scale (GDS) that is especially suitable for nursing home patients. The study was carried out on two different data bases including 23 Dutch nursing homes. Data on the GDS (n=410), the Mini Mental State Examination (n=410) and a diagnostic interview (SCAN; n=333), were collected by trained clinicians. Firstly, the items of the GDS-15 were judged on their clinical applicability by three clinical experts. Subsequently, seven items that were identified as unsuitable were removed using the GDS-data of the Assess-project (n=77), and internal consistency was calculated. Secondly, with respect to criterion validity (sensitivity, specificity, area under ROC and positive and negative predictive values), the newly constructed 8-item version of the GDS was validated in the AGED data set (n=333), using DSM-IV diagnosis for depression as measured by the SCAN as ‘gold standard’. In the AGED dataset, the GDS-8 was internally consistent (a=.80) and high sensitivity rates of 96.3% for major depression and 83.0% for minor depression were found, with a specificity rate of 71.7% at a cut-off point of 2/3. The GDS-8 has good psychometric properties. Given that the GDS-8 is less burdening for the patient, more comfortable to use and less time consuming, it may be a more feasible screening test for the frail nursing home population.
Tijdschr Gerontol Geriatr 2007; 38: 298-304 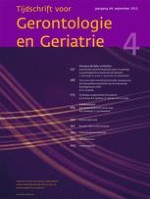