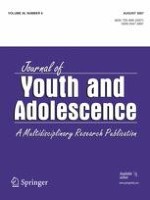 Longitudinal Effects of a Universal Family-Focused Intervention on Growth Patterns of Adolescent Internalizing Symptoms and Polysubstance Use: Gender Comparisons

Mental Health Literacy and Eating-Disordered Behavior: Beliefs of Adolescent Girls Concerning the Treatment of and Treatment-Seeking for Bulimia Nervosa

The Adolescent Self-Regulatory Inventory: The Development and Validation of a Questionnaire of Short-Term and Long-Term Self-Regulation