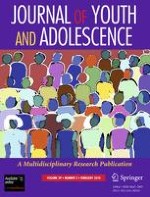 The Relationship Between Anxiety Disorders and Substance Use Among Adolescents in the Community: Specificity and Gender Differences

Protective Families in High- and Low-risk Environments: Implications for Adolescent Substance Use

Attachment to Parents, Social Anxiety, and Close Relationships of Female Students over the Transition to College