Temporal orienting leads to well-documented behavioural benefits for sensory events occurring at the anticipated moment. However, the consequences of temporal orienting in cross-modal contexts are still unclear. On the one hand, some studies using audio-tactile paradigms suggest that attentional orienting in time and modality are a closely coupled system, in which temporal orienting dominates modality orienting, similar to what happens in cross-modal spatial attention. On the other hand, recent findings using a visuo-tactile paradigm suggest that attentional orienting in time can unfold independently in each modality, leading to cross-modal decoupling. In the present study, we investigated if cross-modal decoupling in time can be extrapolated to audio-tactile contexts. If so, decoupling might represent a general property of cross-modal attention in time. To this end, we used a speeded discrimination task in which we manipulated the probability of target presentation in time and modality. In each trial, a manipulation of time-based expectancy was used to guide participants’ attention to task-relevant events, either tactile or auditory, at different points in time. In two experiments, we found that participants generally showed enhanced behavioural performance at the most likely onset time of each modality and no evidence for coupling. This pattern supports the hypothesis that cross-modal decoupling could be a general phenomenon in temporal orienting.
vorige artikel Interaction dynamics between grouping principles in touch: phenomenological and psychophysical evidence
volgende artikel Audiomotor integration of angry and happy prosodies 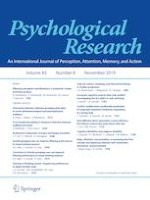