This study examined how county-level resources are associated with the identification of children with autism spectrum disorders (ASD) in Medicaid. Medicaid claims from 2004 were combined with county-level data. There were 61,891 children diagnosed with ASD in the Medicaid system in 2004. Counties with lower per-student education expenditures, more students, a greater proportion of students in special education, higher per capita number of pediatricians and pediatric specialists, and a greater proportion of Medicaid enrollees and white residents had higher Medicaid prevalence. Within states, counties differ in how they implement Medicaid policies. The results suggest the substitution of education and Medicaid-reimbursed services. Our findings highlight the need for geographically targeted outreach to minority groups and clinicians to improve recognition of ASD.
vorige artikel Motor Coordination in Autism Spectrum Disorders: A Synthesis and Meta-Analysis
volgende artikel Screening for Autism Spectrum Disorders in Flemish Day-Care Centres with the Checklist for Early Signs of Developmental Disorders 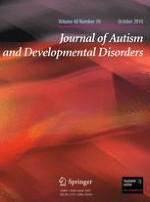 Punishment and Sympathy Judgments: Is the Quality of Mercy Strained in Asperger’s Syndrome?

Optimism, Social Support, and Well-Being in Mothers of Children with Autism Spectrum Disorder