Country-level structural stigma, defined as prejudiced population attitudes and discriminatory legislation and policies, has been suggested to compromise the wellbeing of sexual minority adults. This study explores whether and how structural stigma might be associated with sexual minorities’ school-based and adulthood experiences of victimization and adulthood life satisfaction. Using a sample of 55,263 sexual minority individuals (22% female; 53% 18–29 years old; 85% lesbian/gay, 15% bisexual) living across 28 European countries and a country-level index of structural stigma, results show that sexual minorities, especially men, reported school bullying in both higher- and lower-stigma countries. Higher rates of school bullying were found among sexual minorities living in higher-stigma countries when open about their identity at school. Past exposure to school bullying was associated with lower adulthood life satisfaction, an association partially explained by an increased risk of adulthood victimization. These findings suggest that sexual minorities living in higher-stigma countries might benefit from not being open about their sexual identity at school, despite previously established mental health costs of identity concealment, because of the reduced risk of school bullying and adverse adulthood experiences. These results provide one of the first indications that structural stigma is associated with sexual minority adults’ wellbeing through both contemporaneous and historical experiences of victimization.
Opmerkingen
Publisher’s note Springer Nature remains neutral with regard to jurisdictional claims in published maps and institutional affiliations.

This study used cross-sectional data from 93,079 respondents who were 18 years or older; living in one of the 28 EU member states; self-identifying as lesbian, gay, bisexual, or transgender (LGBT); and participating in the EU-LGBT survey. The survey was conducted by the European Union Agency for Fundamental Rights in 2012 (European Union Agency for Fundamental Rights 2014) and participants were recruited through social networking websites, mailing lists, press releases, LGBT organizations, and dating websites. The number of respondents varied by country (e.g., Germany [n = 20,271] to Luxembourg [n = 318]). Further details about the data collection and translation procedures have been published elsewhere (European Union Agency for Fundamental Rights 2014). As the skip logic of the online survey was set up so that those identifying as transgender were not asked about bullying due to their sexual identity, gender minorities were excluded from the study (n = 6771; 7.3%). Given the life course perspective of this study, the sample was further restricted by consecutively excluding those who had not spent their school years in their current country of residence (n = 7763; 8.3%), lived outside the EU (n = 328; 0.4%), and had missing data on any of the key study variables (n = 22,954; 24.6%). A total of 55,263 sexual minority individuals were included.
Regarding the missingness of data, differences were tested between those included in the study and those who were excluded from the study on the basis of having missing data on any of the key study variables. The included sample was more likely to be male, to be younger, to report an ethnic minority status, to have not attended university, and to report lower household income than the excluded group with missing data. Compared with this excluded group, the included sample was also more likely to live in higher-stigma countries (Mdiff: 0.18, p < 0.001), to be open at school (AOR: 5.18, p < 0.001), to be victimized in adulthood (AOR: 1.14, p < 0.001), and to report lower adulthood life satisfaction (Mdiff: −0.14, p < 0.001).

Respondents were asked which of the following categories best described them with regard to their sexual minority identity, namely “lesbian”, “gay”, “bisexual”, or “other”.

Identity-targeted school bullying was measured with a question tailored to the participant’s reported sexual identity: “During your schooling before the age of 18, did you experience negative comments or conduct at school because of you being lesbian/gay/bisexual?” on a scale from “never”, “rarely”, “often”, to “always” or “does not apply”. Based on the variable distribution and uneven spacing between ordinal categories, responses were dichotomized into either never and rarely bullied at school (= Not bullied) or often and always bullied at school because of being lesbian, gay, or bisexual (LGB) (= Bullied) to facilitate the interpretation of the analyses.

The level of openness about the respondent’s self-reported sexual identity at school was measured with the question “During your schooling before the age of 18, did you openly talk about you being LGB at school?” Responses were measured on a scale from “never”, “rarely”, “often”, to “always” or “does not apply”. Based on the variable distribution and uneven spacing between ordinal categories, identity openness at school was then dichotomized to contain never and rarely open (= Low openness) versus often and always open (= High openness) to facilitate the interpretation of the analyses.

The frequency of experienced victimization in adulthood was measured with the question “How many times did someone physically/sexually attack or threaten you with violence in the last 12 months in the European Union/in this country?” Based on the skewed distribution of the variable, response options were dichotomized to contain no experiences of victimization during the past 12 months (= Not victimized) versus any exposure to past-year victimization (= Victimized).

Life satisfaction in adulthood was measured with the question “All things considered, how satisfied would you say you are with your life these days?” with response alternatives ranging from 1 = Very dissatisfied to 10 = Very satisfied. This item demonstrates high within-person stability and high validity across time, societal conditionals, and cultures and is consistently associated with quality of life and various mental health outcomes (e.g., Diener et al. 2013).

Socio-demographic covariates included in the analyses were age and household income based on participant’s self-reported monthly net household income, per preset country-specific population quartiles. These factors were used as individual-level covariates given that life satisfaction is negatively correlated with both younger age (Westerhof and Keyes 2010) and low income (Sacks et al. 2010). To characterize the demographic makeup of the sample, we examined other socio-demographic variables: gender, ethnic minority status, level of educational attainment, and level of urbanicity. Gender was operationalized as self-reported sex assigned at birth.

Scores for structural stigma toward sexual minorities in each country were based on a measure regarding population attitudes toward homosexuality and an index of discriminatory legislation and policies. Average country scores of population attitudes toward homosexuality, measured with the item “Gay men and lesbians should be free to live their own lives as they wish”, were derived from the 2012 European Social Survey (European Social Survey 2012). Data on country-level discriminatory and protective laws and policies were taken from the 2012 Europe Rainbow Index created by the International Lesbian, Gay, Bisexual, Trans and Intersex Association Europe (International Lesbian, Gay, Bisexual, Trans and Intersex Association Europe 2012). The measures were transformed into z scores and summed into a composite country-level structural stigma score, with higher scores indicating countries with higher levels of country-level structural stigma. Although the measure of country-level structural stigma was based on assessments during the year of the survey (i.e., 2012), this measure also likely reflects the relative rank-ordering of countries in terms of structural stigma present during the time in which the respondents attended school. Recent analyses from the US General Social Survey and by the Williams Institute indicate that the rank ordering of structural stigma climates for sexual minorities (by US state or by country, respectively) were relatively stable over a 30-year period in the US (results not shown, but available upon request) and over 36 years across 174 countries globally (Flores 2019).

The gross domestic product at purchasing power parity per capita in 2012 was derived from the World Bank as a country-level covariate given its strong association with population life satisfaction as shown in previous studies (Boyce et al. 2010).

In order to adjust for the nested structure of the data (by country), generalized linear mixed modeling (SPSS Statistics version 24; IBM Corporation, Armonk, NY, USA) was used to estimate cross-national and country-specific proportions and means. For the two gender groups separately, stepwise preparatory models and the final moderated serial mediation models used two-level random-slope modeling procedures in Mplus software (Muthén & Muthén, Los Angeles, CA, US; version 8) based on maximum likelihood with robust standard error estimates. The final models tested whether school bullying and subsequent adulthood victimization may explain the association between country-level structural stigma and adulthood life satisfaction, with identity openness as moderator of the country-level structural stigma to school bullying pathway. The final models were adjusted for nesting, respondents’ age, household income, and country-level prosperity. In all analyses, a significance level of α = 0.05 was used.

Hypothesis 2: Identity Openness as Moderator of the Association Between Country-Level Structural Stigma and School Bullying

The authors would like to thank the European Agency for Fundamental Rights for providing access to the individual-level data from the EU-LGBT survey. Results from this study were presented at the European Public Health Conference in Ljubljana, Slovenia, in 2018.

The current study was financially supported by grants from the Swedish Research Council [grant number 2016-01707] and the Swedish National Research School for Healthcare Sciences [grant number 2015-0133]. The funding agencies were not involved in study design, data collection, analyses, data interpretation, or the reporting of the study. Open access funding provided by Karolinska Institute.

The individual-level data that support the findings of this study are available from the European Union Agency for Fundamental Rights, but restrictions apply to the availability of these data.

All individual participants consented to the study after being informed on the purpose of the study and its privacy policy.
Open Access This article is licensed under a Creative Commons Attribution 4.0 International License, which permits use, sharing, adaptation, distribution and reproduction in any medium or format, as long as you give appropriate credit to the original author(s) and the source, provide a link to the Creative Commons license, and indicate if changes were made. The images or other third party material in this article are included in the article’s Creative Commons license, unless indicated otherwise in a credit line to the material. If material is not included in the article’s Creative Commons license and your intended use is not permitted by statutory regulation or exceeds the permitted use, you will need to obtain permission directly from the copyright holder. To view a copy of this license, visit http://​creativecommons.​org/​licenses/​by/​4.​0/​.
Publisher’s note Springer Nature remains neutral with regard to jurisdictional claims in published maps and institutional affiliations.
vorige artikel Only a Burden for Females in Math? Gender and Domain Differences in the Relation Between Adolescents’ Fixed Mindsets and Motivation
volgende artikel Hadeel Al-Alosi: The Criminalisation of Fantasy Material: Law and Sexually Explicit Representations of Fictional Children
insite
INHOUD
share
DELEN 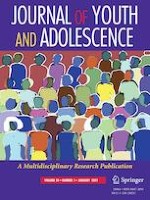 Unpacking Racial/Ethnic Differences in the Associations between Neighborhood Disadvantage and Academic Achievement: Mediation of Future Orientation and Moderation of Parental Support

Coping with Discrimination from Peers and Adults: Implications for Adolescents’ School Belonging

Sex-Based Differences in Criminal Victimization of Adolescents: A Meta-Analysis