» Toegang tot de volledige tekst krijgen
Fatigue is a contributor to decreased quality of life and one of the most common symptoms reported by cancer survivors. Most assessment of fatigue has been retrospective and/or unidimensional. Single-item visual analogue scale ratings are commonly used, despite arguments that fatigue is better conceptualized as multidimensional. The relationships of daily to weekly ratings of fatigue, or of unidimensional to multidimensional assessments, have not been explored. Twenty-five breast cancer survivors provided daily ratings of fatigue and completed the Multidimensional Fatigue Symptom Inventory-Short Form weekly for one month. Using hierarchical linear modeling, stronger relationships of weekly ratings to average and peak rather than most recent daily ratings were found. Visual analogue scale ratings shared more variance with the General Fatigue subscale than with the other four fatigue dimensions measured. Findings suggest that different information is captured by daily versus weekly reports, and that although visual analogue scale ratings can provide a quick assessment of general fatigue, they do not capture other important dimensions. 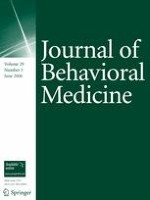 Neuroticism and Physical Disorders Among Adults in the Community: Results from the National Comorbidity Survey