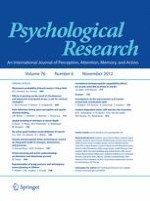 Representation of grasp postures and anticipatory motor planning in children

Investigation on the improvement and transfer of dual-task coordination skills

Effects of pointing on the recall of simultaneous and sequential visuospatial arrays: a role for retrieval strategies?

Anxiety and perceptual-motor performance: toward an integrated model of concepts, mechanisms, and processes

Context-dependent motor skill and the role of practice