We tested the effects of introducing a secondary sequence into the serial reaction time task. Specifically, we examined the role of correlated streams of information and response relevance. In the first experiment, the order of stimulus locations was correlated with the order of key press responses in the conventional way. A symbol-identity sequence, of a different length, was also present but no manual responses were made to it, and it was not correlated with any other stream of information. In the second experiment, two concurrent streams of location-based stimuli were presented. Both were sequenced but only one sequence required responses. Importantly, the sequences were either correlated with one another or not (same vs. different lengths). In the third experiment, the same design was used but with one sequence visual and the other auditory. In all three experiments, participants became sensitive to the sequence that required responses, and resultant knowledge was largely explicit. They were also sensitive to the sequence that did not require responses but only when it was correlated with the sequence that did, and here resultant knowledge was implicit. The findings suggest that the presence of a secondary sequence can affect learning, but only when stimuli in that sequence are integrated, through correlation, with responses made to the primary sequence. 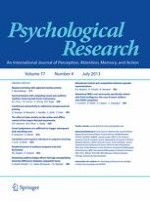 Attentional WM is not necessarily specifically related with fluid intelligence: the case of smart children with ADHD symptoms