None declared.
Open Access This article is distributed under the terms of the Creative Commons Attribution License which permits any use, distribution, and reproduction in any medium, provided the original author(s) and the source are credited.
vorige artikel Do residents in cardiology need more training to make them talk about sex?
volgende artikel Should you be worried?
share
DELEN 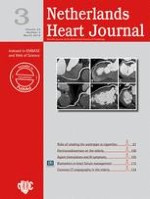 Biomarkers in outpatient heart failure management; Are they correlated to and do they influence clinical judgment?

Success of electrocardioversion on the elderly

Clinical evaluation of heart failure patients: what good are biomarkers bringing us?