Twenty-nine youth with autism spectrum disorders and 26 with typical development between 12 and 18 years of age were engaged in structured interviews (ADOS). The interviews were videotaped and rated for atypical conversational behaviors by trained raters, using the Pragmatic Rating Scale (Landa et al. Psychol Med 22:245–254, 1992). The ASD group was divided into AS and HFA/PDD-NOS subgroups. Significant differences were found among groups on approximately one-third of the PRS items. These items involved primarily the management of topics and information, reciprocity, intonation, and gaze management. The only differences to reach significance between the AS and HFA/PDD-NOS group were a greater tendency for overly formal speech on the part of the AS group, and more difficulty with gaze management on the part of the group with HFA/PDD-NOS. The implications of these findings for understanding and treating conversational deficits in ASD are discussed.
vorige artikel The Use of Weighted Vests with Children with Autism Spectrum Disorders and Other Disabilities
volgende artikel Validation of the Autism Spectrum Screening Questionnaire in a Total Population Sample 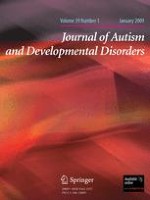