The publication in 2009 of the Guidance for Industry by US Food and Administration (FDA) [ 1] ushered in a significant change in the way patient-reported outcome measures (PROMs) are evaluated when used by pharmaceutical companies to support product label claims. In particular, the FDA Guidance emphasised patient input in the development of PROMs. To underline this point, a review of the reasons for FDA rejections of PRO label claims [ 2] concluded that just under 40 % of all rejections were due to the PROM not being fit for purpose; 31 % of product PRO claims were rejected due to a lack of content validity. This approach adopted by the FDA may be problematic for those legacy PROMs whose development predates the Guidance, one of which is the European Organisation for Research and Treatment of Cancer (EORTC) QLQ-C30 [ 3]. There is no evidence that the early development of the EORTC QLQ-C30 incorporated patient involvement in the content validity other than in rating the acceptability of items. Despite this, the instrument continues to be widely used in oncology clinical trials: a search on clinicaltrials.gov for the period 1 January 2009 to 31 December 2013 revealed 207 registered trials that included the EORTC QLQ-C30. Furthermore, its inclusion has been recommended in comparative effectiveness research [ 4], and it has been shown to be of use in facilitating patient–clinician communication [ 5]. Beyond that the instrument has been part of a successful PRO product label claim granted by the FDA [ 6] after the publication of the Guidance document. …
vorige artikel Health perceptions and symptom burden in primary care: measuring health using audio computer-assisted self-interviews
volgende artikel The Patient Activation Measure: a validation study in a neurological population 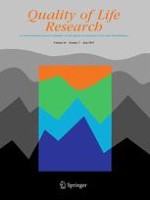 The effect of mirabegron on patient-related outcomes in patients with overactive bladder: the results of post hoc correlation and responder analyses using pooled data from three randomized Phase III trials

Health status and quality of life: results from a national survey in a community-dwelling sample of elderly people

Future orientation and health quality of life in primary care: vitality as a mediator