Although relevant nomothetically-based personality literature has made great advances in recent years correlating traits to measures of procrastination, little is known about the specific irrational beliefs of procrastinators, especially when they are actively avoiding tasks or situations. Based on theories from Rational Emotive Behavior Therapy (REBT), it was hypothesized that compared to non-procrastinators, college student academic procrastinators would show greater self depreciation, greater other depreciation, greater life condition depreciation, and a lower frustration tolerance. Academic procrastination was operationally defined by quartile distributions on two self- report measures and three classroom-based assignments. Procrastinators and non-procrastinating students were given instructions to write approximately 500 words about their thoughts and feelings while they were in the process of actively putting off a specific, real event. While actually procrastinating, students logged on to a web site and made text entries describing what was going through their minds. Data were analyzed with the Psychiatric Content and Diagnosis Program Version 3 (PCAD 3; Gottschalk and Bechtel in Psychiatric content and diagnosis: the PCAD 3. GB Software, Brighton, MI, 2007). Procrastinators and non-procrastinators differed on relevant PCAD scales, supporting the hypotheses derived from REBT theory. Treatment implications and directions for future research are discussed. 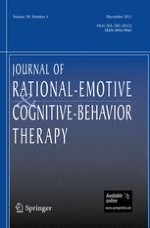 Procrastination Automatic Thoughts as a Personality Construct: An Analysis of the Procrastinatory Cognitions Inventory

Dealing with Procrastination: The REBT Approach and a Demonstration Session

Lost in the Moment? An Investigation of Procrastination, Mindfulness, and Well-being

Procrastination and Self-Regulatory Failure: An Introduction to the Special Issue

The Complexity of the Relation between Fear of Failure and Procrastination