Constructing arguments for the interpretation and use of patient-reported outcome measures in research: an application of modern validity theory | mijn-bsl Skip to main content
ZOEKEN MENU 1 2 3 4

The past 100 years have witnessed an evolution of the meaning of validity and validation within the fields of education and psychology. Validity was once viewed as a property of tests and scales, but is now viewed as the extent to which theory and evidence support proposed interpretations and uses of test scores. Uncertainty about what types of validity evidence were needed motivated the current “argument-based” approach, as reflected in the 2014 Standards for Educational and Psychological Testing. According to this approach, investigators should delineate the assumptions required in order for a proposed interpretation or use to be plausible and then seek evidence that supports or refutes those assumptions. Though validation practices within the field of patient-reported outcome measurement have implicitly included many elements of the argument-based approach, the approach has yet to be explicitly adopted. To facilitate adoption, this article proposes an initial set of assumptions that might be included in most arguments for research-related interpretations and uses of scores from patient-reported outcome measures. The article also includes brief descriptions of the types of evidence that would be best suited for evaluating each assumption. It is hoped that these generic assumptions will stimulate further discussion and debate among quality of life researchers regarding how best to adopt modern validity theory to patient-reported outcome measures.
vorige artikel Frequency and influence of “not relevant” responses on the Dermatology Life Quality Index among adults with atopic dermatitis
volgende artikel Identifying the minimal important difference in patient-reported outcome measures in the field of people with severe mental illness: a pre–post-analysis of the Illness Management and Recovery Programme

Titel
Constructing arguments for the interpretation and use of patient-reported outcome measures in research: an application of modern validity theory
Auteur
Kevin P. Weinfurt 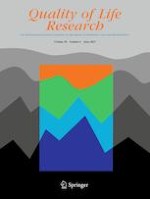 Use of the Long-Term Conditions Questionnaire (LTCQ) for monitoring health-related quality of life in people affected by cognitive impairment including dementia: pilot study in UK memory clinic services

Subjective life expectancy and associated factors among cancer survivors over 45 years old: evidence from the CHARLS

The validity of proxy responses on patient-reported outcome measures: Are proxies a reliable alternative to stroke patients’ self-report?

The hypospadias-specific health-related quality of life conceptual framework: a scoping review of the literature

Adverse childhood experiences and impact on quality of life in adulthood: development and validation of a short difficult childhood questionnaire in a large population-based health survey