Consequences of Corporal Punishment Among African Americans: The Importance of Context and Outcome | mijn-bsl Skip to main content
ZOEKEN MENU 1 2 3 4

Corporal punishment is a controversial practice used by the majority of American parents and is especially prevalent among African Americans. Research regarding its consequences has produced mixed results although it is clear that there is a need for considering the context within which corporal punishment is administered. To assess the impact of spanking, we employed an expanded parenting typology that includes corporal punishment. Longitudinal self-report data from a sample of 683 African American youth (54 % female) were utilized to evaluate the relative impact of the resulting eight parenting styles on three outcomes: conduct problems, depressive symptoms, and school engagement. Results from Negative Binomial Regression Models indicate that the effect of corporal punishment depends upon the constellation of parenting behaviors within which it is embedded and upon the type of outcome being considered. While it is never the case that there is any added benefit of adding corporal punishment, it is also the case that using corporal punishment is not always associated with poor outcomes. Overall, however, our findings show that parenting styles that include corporal punishment do not produce outcomes as positive as those associated with authoritative parenting.
vorige artikel A Comparison of Adolescents Engaging in Self-Injurious Behaviors With and Without Suicidal Intent: Self-Reported Experiences of Adverse Life Events and Trauma Symptoms
volgende artikel The Impact of Emotional Disturbances on the Arrest Trajectories of Youth as They Transition into Young Adulthood 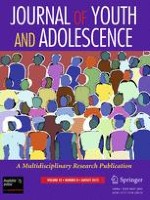 Longitudinal Dynamics of Depressogenic Personality and Attachment Dimensions in Adolescence: An Examination of Associations with Changes in Depressive Symptoms

A Comparison of Adolescents Engaging in Self-Injurious Behaviors With and Without Suicidal Intent: Self-Reported Experiences of Adverse Life Events and Trauma Symptoms