To evaluate the factor structure of the 12-item General Health Questionnaire (GHQ-12) in a population of Spanish adolescents.

Cross-sectional study among 4,146 individuals (mean age 16.3 years). The students completed a health questionnaire that included the GHQ-12. A confirmatory factor analysis (CFA) was conducted with four factor structure models. Three of the models were theory-driven: unidimensional, two-dimensional (positive and negative questions), model proposed by Graetz (anxiety and depression, social dysfunction, loss of confidence); and the fourth model was based on our exploratory factor analysis (EFA).

In an adolescent population from Southern Europe, the GHQ-12 showed high internal consistency. The factor structure that best fitted the data was the Graetz three-dimensional model. However, the high correlations observed between factors suggest that the GHQ-12 should be used as a unidimensional scale, as currently done. 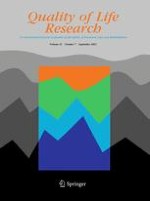 Erratum to: Psychometric evaluation of the Cystic Fibrosis Questionnaire-Revised in a national, US sample

Measuring fatigue in persons with multiple sclerosis: creating a crosswalk between the Modified Fatigue Impact Scale and the PROMIS Fatigue Short Form

The association between cumulative adversity and mental health: considering dose and primary focus of adversity