» Toegang tot de volledige tekst krijgen
Belangrijke opmerkingen
Work on this manuscript was supported by the John D. and Catherine T. MacArthur Foundation Research Network on Psychopathology and Development, and a grant to the first author from the National Institute of Child Development (NICHD) Grant 1R03HD045501. 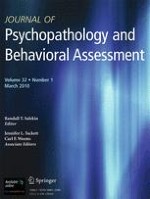 Emotion Regulation and Attachment: Unpacking Two Constructs and Their Association

Development and Evaluation of the Parental Beliefs about Anxiety Questionnaire

Advances, Problems, and Challenges in the Study of Emotion Regulation: A Commentary

The Assessment of Emotion Regulation: Improving Construct Validity in Research on Psychopathology in Youth—An Introduction to the Special Section