The online version of this article (doi:10.​1007/​s11136-015-1005-8) contains supplementary material, which is available to authorized users.
For the AgeCoDe Study Group.
Steffi G. Riedel-Heller and Hans-Helmut König have contributed equally to this work.

To investigate the coevolution of depression and health-related quality of life (HRQoL) in old age.

In a representative survey of the German general population aged 75 years and older, the course of HRQoL and depression was observed over 4.5 years (3 waves). HRQoL was assessed by the Visual Analogue Scale (EQ VAS) of the EQ-5D instrument, while the Geriatric Depression Scale was used to measure depression. A panel vector autoregressive model was used to account for the complex coevolution of depression and HRQoL. Unobserved heterogeneity was taken into account by taking the first differences.

Findings indicate that the direction of evolution from HRQoL to depression deserves more attention. Furthermore, treatment of depression in late life should aim at improving HRQoL in which remission of depressive symptoms is necessary but not sufficient. 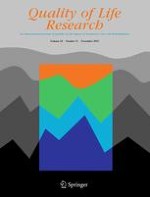 Fatigue trajectories during the first 8 months after breast cancer diagnosis