A large body of research has reported visual perception deficits in both people with dyslexia and autistic spectrum disorders. In this study, we compared form and motion coherence detection between a group of adults with high-functioning autism, a group with Asperger’s disorder, a group with dyslexia, and a matched control group. It was found that motion detection was intact in dyslexia and Asperger. Individuals with high-functioning autism showed a general impaired ability to detect coherent form and motion. Participants with Asperger’s syndrome showed lower form coherence thresholds than the dyslexic and normally developing adults. The results are discussed with respect to the involvement of the dorsal and ventral pathways in developmental disorders.
volgende artikel Friendship in High-functioning Children with Autism Spectrum Disorder: Mixed and Non-mixed Dyads 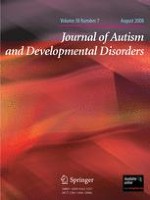