Comparative studies between Euroqol-5D (EQ-5D) and ShortForm 6D (SF-6D) utilities have been performed for a number of diseases, but not yet for orphan diseases. Pompe disease is an orphan disease with a prevalence of <5/10,000, characterized by impaired ambulatory and pulmonary functioning. We compared the psychometric properties of EQ-5D and SF-6D in patients with this disease and assessed their convergent validity, discriminative ability and sensitivity to change.

EQ-5D utilities and SF-6D utilities were computed using the UK value set. Dimensions and utilities of the two instruments were compared by correlation coefficients and descriptive statistics. We assessed whether EQ-5D and SF-6D were able to discriminate between different levels of severity and examined sensitivity to change for patients with multiple observations.

Correlations between theoretically related dimensions of the EQ-5D and SF-6D were highly significant and were moderate to strong (range rho = 0.409–0.564). Utility values derived from the two instruments were similar (mean EQ-5D = 0.670; mean SF-6D = 0.699) and correlated strongly (rho = 0.591). Discriminative properties were somewhat better for EQ-5D; mean changes and effect sizes were better for SF-6D.

Overall, we conclude that both instruments appear to be equally appropriate with respect to assessing utilities in Pompe disease, but neither of them performed excellently. The descriptive system of the SF-6D describes health states for Pompe disease more accurately. EQ-5D showed better discriminative properties. The SF-6D performed better with respect to sensitivity to change. 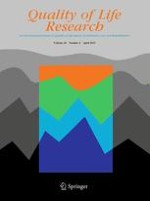 Quality of life domains important and relevant to family caregivers of advanced cancer patients in an Asian population: a qualitative study