Comparison of Eating Attitudes between Adolescent Girls with and without Asperger Syndrome: Daughters’ and Mothers’ Reports | mijn-bsl Skip to main content
ZOEKEN MENU 1 2 3 4

Despite the evidence that individuals with Asperger syndrome (AS) have a propensity for being underweight or having comorbid eating disorders, no previous research has compared the eating attitudes of adolescent girls with AS to typically developing peers. This study compared reports of eating problems provided by the adolescent girls themselves (56 with and 56 without AS) and their mothers on the EAT-26. Results indicated that adolescent girls with AS are at a higher risk for eating problems than their typically developing peers according to their reports and the reports of their mothers. Moreover, it was found that although the agreement between mothers’ and daughter’s reports is very satisfactory, mothers of girls with AS report statistically less eating-disordered behaviors than their daughters.
vorige artikel Change Detection in Naturalistic Pictures Among Children with Autism
volgende artikel Use of Vocational Rehabilitative Services Among Adults with Autism

Titel
Comparison of Eating Attitudes between Adolescent Girls with and without Asperger Syndrome: Daughters’ and Mothers’ Reports
Auteur
Efrosini Kalyva 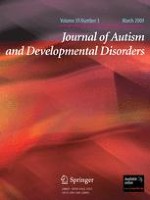 Intrinsic and Extrinsic Motivation for Stereotypic and Repetitive Behavior

Use of Vocational Rehabilitative Services Among Adults with Autism

When Asking Questions is Not Enough: An Observational Study of Social Communication Differences in High Functioning Children with Autism