This article describes a latent variables approach to empirically comparing the validity of independently generated, idiographic, cognitive case formulations (CCFs) of a single case. Each of two CCFs differed in the content of idiosyncratic cognitive schema (ICS) and their hypothesized relationships to distress. The CCFs were compared using multivariate time series ratings collected daily. First, the convergent and discriminant validity and dynamic structure of the ICSs hypothesized by each of the two clinicians were evaluated using confirmatory dynamic factor analysis. Second, the two CCFs were compared as to how well the ICSs predicted daily variability in latent distress variables. Compared to the novice clinician, the ICSs in the CCF of the clinician with expertise in CCF explained an average of twice the proportion of variance in the distress variables. This methodology permits the direct empirical comparison of the validity of alternative CCFs without appealing to external judges or criterion groups. 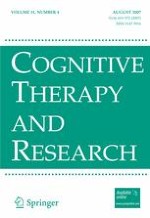