This study was conducted to assess the redistribution properties of the EQ-5D-3L when using the EQ-5D-5L and to compare the validity, informativity, and reliability of both EQ-5D-3L and EQ-5D-5L in Korean cancer patients.

Patients visiting one ambulatory cancer center self-administered the two versions of the EQ-5D and the EORTC QLQ-C30 questionnaire. Redistribution properties in each dimension of EQ-5D were analyzed between EQ-5D-3L and EQ-5D-5L. Informativity was evaluated using the Shannon entropy and ceiling effect. Convergent validity was evaluated by comparing the EQ-VAS, ECOG performance status, and EORTC QLQ-C30 subscales. Reliability was also evaluated in terms of test–retest reliability.

The EQ-5D-5L had greater informativity and lower rate in the ceiling effect than those values of the EQ-5D-3L. The EQ-5D-5L showed good construct validity and reasonable reliability. Therefore, considering these findings, the EQ-5D-5L may be preferable to the EQ-5D-3L.
vorige artikel Psychometric properties of a Korean version of the Chronic Pain Acceptance Questionnaire in chronic pain patients
volgende artikel Ten-year quality of life outcomes among patients with schizophrenia and schizoaffective disorder II. Predictive value of psychosocial factors 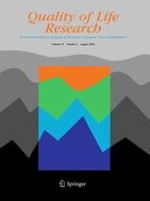 Quality of life of patients in renal replacement therapy in Brazil: comparison of treatment modalities

Comparison of hypothetical and experienced EQ-5D valuations: relative weights of the five dimensions

The associations among coping, nadir CD4+ T-cell count, and non-HIV-related variables with health-related quality of life among an ambulatory HIV-positive patient population

Quality of life in panic disorder: looking beyond symptom remission