To assess the performance of the EQ-5D-5L version compared with the standard EQ-5D-3L in a clinical setting targeted at patients with chronic hepatic diseases (CHDs).

We introduced the 5L descriptive system into a cost-of-illness study involving patients with different CHDs. The patients completed a questionnaire including the two versions of the EQ-5D, together with other questions related to their condition. We tested the feasibility, the level of inconsistency, the redistribution properties among consistent responses, the ceiling effect, the discriminative power, and the convergent validity of the 5L compared with the 3L system.

A total of 1,088 valid patients were recruited: 62 % male, 19–89 (median = 59) years old. Patients had chronic hepatitis from HCV (31.8 %) or HBV infections (29.3 %) or other causes (7.8 %), 20.4 % had cirrhosis, 11.9 % underwent liver transplantation, and 7.8 % had hepatic carcinoma. Less than 1 % of EQ-5D-5L were returned blank, and 1.6 % or less of missing values were calculated on the dimensions of the partially completed questionnaires. The proportion and weight of inconsistent responses (i.e., 3L responses that were at least two levels away from the 5L responses) was 2.9 % and 1.2 on average, respectively. Regarding redistribution, 57–65 % of the patients answering level 2 with the 3L version redistributed their responses to levels 2 or 4 with the 5L version. A relative 7 % reduction of the ceiling effect was found. Furthermore, the absolute informativity increased but the relative informativity slightly decreased in every domain, and the convergent validity with the VAS improved.

In a clinical setting involving CHD patients, the EQ-5D-5L was shown to be feasible and with promising levels of performance. Our findings suggest that the 5L performs better in at least some of the properties analyzed, and encourage further research to also test other psychometric properties of this new version of the EQ-5D.
vorige artikel Elicitation of health state utilities in soft tissue sarcoma
volgende artikel Measurement properties of the EQ-5D-5L compared to the EQ-5D-3L across eight patient groups: a multi-country study 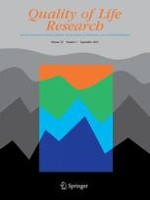 Determinants of health-related quality of life in people with Parkinson’s disease: a path analysis

Erratum to: A systematic review of outcomes of chronic disease self-management interventions