Among adolescents, positive parenting behavior has been found to lessen the negative effects associated with living in an impoverished community. Few studies however, have focused on the association between macro-level community influences and adolescent outcomes, and the possible parenting mechanisms through which this relationship exists. Further, less empirical attention has been directed towards the unique role played by fathers in mediating contextual influences on adolescent outcomes. To address this gap in the literature, using a nationally representative subsample of adolescents, the current study explores the mediating role of father’s school-related involvement and father–adolescent relationship quality on the association between community-level disadvantage and adolescent’s academic achievement. Results from multilevel structural equation modeling revealed a significant relationship between community disadvantage and adolescent’s academic achievement, which was further mediated by aspects of father’s influence. Among other things, findings lend support for a model outlining father’s influence as a mediator of the relationship between contextual factors and adolescent’s academic success.
volgende artikel Adolescent Delinquency: Is Too Much or Too Little Parental Control a Problem? 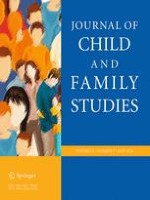 Stephanie L. Brooke and Dorothy A. Miraglia (Eds.): Using the Creative Therapies to Cope with Grief and Loss

Assessing the Helpfulness of One Parenting Assistance Helpline

The Association Between Reflective Functioning and Parent–Child Relationship Quality