Parent training (PT) has been documented as an effective intervention for early ADHD based on parental assessment, but documentation of transfer of its results outside the family context has been limited. Due to the cross-contextual impairments typically caused by ADHD, it has been proposed that PT in combination with an intervention in kindergarten or school based on systematic teacher training (TT) would be better suited. The objective of this study was to evaluate the effectiveness of a combination of PT and TT in a community sample of children with early ADHD problems. Families of 64 3-8-year old children were randomized to either PT alone with “The Incredible Years” PT or to a combined PT + TT intervention. Moderate to large pre-post effect sizes on mother-reported outcomes were revealed in both groups, in line with those generally reported in the literature on PT interventions for early ADHD. With an n of 64, the current study was powered to detect superiority of the PT + TT intervention if the difference was of a moderate effect size (Cohen’s d = 0.5). There were no statistically significant differences between the two groups on any of the outcome measures as rated by parents or teachers. In conclusion, the study did not provide support for the combined PT + TT intervention for early ADHD problems as a superior intervention in comparison with PT alone. 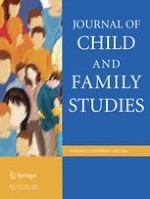 Family Coping During Hospitalization of Children with Chronic Illnesses