The speed-accuracy trade-off is a fundamental movement problem that has been extensively investigated. It has been established that the speed at which one can move to tap targets depends on how large the targets are and how far they are apart. These spatial properties of the targets can be quantified by the index of difficulty (ID). Two visual illusions are known to affect the perception of target size and movement amplitude: the Ebbinghaus illusion and Muller-Lyer illusion. We created visual images that combined these two visual illusions to manipulate the perceived ID, and then examined people’s visual perception of the targets in illusory context as well as their performance in tapping those targets in both discrete and continuous manners. The findings revealed that the combined visual illusions affected the perceived ID similarly in both discrete and continuous judgment conditions. However, the movement outcomes were affected by the combined visual illusions according to the tapping mode. In discrete tapping, the combined visual illusions affected both movement accuracy and movement amplitude such that the effective ID resembled the perceived ID. In continuous tapping, none of the movement outcomes were affected by the combined visual illusions. Participants tapped the targets with higher speed and accuracy in all visual conditions. Based on these findings, we concluded that distinct visual-motor control mechanisms were responsible for execution of discrete and continuous Fitts’ tapping. Although discrete tapping relies on allocentric information (object-centered) to plan for action, continuous tapping relies on egocentric information (self-centered) to control for action. The planning-control model for rapid aiming movements is supported.
vorige artikel Bimanual force control: cooperation and interference?
volgende artikel The influence of attention toward facial expressions on size perception 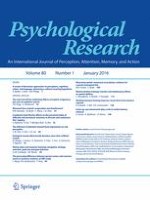