Aggression and impulsivity in combination with cognitive impairment are feature patients often present with in child and adolescent psychiatric services. However, concurrent epileptic seizures should alert the clinician to be on the outlook for genetic causes. The first description of epileptic seizures occurring with mental retardation and abnormal behaviour in connection with a ring chromosome 20 aberration (r(20)) was reported in 1972 (Atkins et al. 1972). Further case reports that suggested a possible causal link between epilepsy and r(20) were published in the same year (Uchida and Lin 1972; de Grouchy et al. 1972; Faed et al. 1972). Based on similarities in the clinical morphology of these cases and the common link to r(20) the existence of a genetic ring chromosome 20 syndrome was hypothesized (Borgaonkar et al. 1976). Subsequently, in many other reported cases intractable epilepsy, mental retardation, behavioural problems and dysmorphisms, without a consistent pattern of dysmorphology, were put together to a syndrome related to this specific chromosomal aberration (Inoue et al. 1997; Stewart et al. 1979). Since cognitive and behavioural decline develops after the first seizure, r(20) syndrome has also been considered as an epileptic encephalopathy (Vignoli et al. 2009) albeit there is no consensus towards this etiologic labelling. Though the clinical experience renders epilepsy as the main clinical feature of this rare chromosomal defect, mild to moderate mental impairment and behavioural problems can also occur throughout the r(20) syndrome (Hosain 2009). Furthermore, this syndrome has been characterized by phenotypic variability, particularly concerning cognitive deficits, behavioural disturbances and malformations or rather dysmorphisms (Kobayashi et al. 1998). As behavioural aspects can dominate the clinical picture, especially when the patient predominantly presents with impulsivity or aggression, the physician’s attraction can easily be distracted from an etiological relation to r(20) syndrome. In the following we present a case of r(20) syndrome with mosaicism that presented primarily with aggressive behaviour and cognitive decline which impeded and protracted the diagnosis of r(20) syndrome. …
vorige artikel Brief Report: The Assessment of Anxiety in High-Functioning Adolescents with Autism Spectrum Disorder
volgende artikel W. Ashcroft, S. Argiro and J. Keohane: Success Strategies for Teaching Kids with Autism 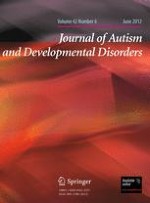 Individualizing Interventions for Young Children with Autism in Preschool

Brief Report: Approaches to 31P-MRS in Awake, Non-Sedated Children with and without Autism Spectrum Disorder