This study investigated the extent to which children’s negative information processing biases are pervasive across the cognitive modalities of attention, judgment, and memory and, further, whether such biases are specifically associated with anxiety, depression, and/or aggression. 133 children between the ages of 8 and 14 years were assessed on an attention allocation task, a vignette interpretation measure, and a memory recall task. Children also completed anxiety and depression inventories, and were rated by teachers on a measure of aggression. Overall the results suggested a predominantly pervasive negative bias associated with childhood psychopathology, with some evidence of specificity. The canonical correlation analyses indicated that high levels of anxiety, depression, and aggression were associated with biases: attention to negative information, interpretation of ambiguous situations as negative, and preferential recall of negative words. Above this general bias, anxiety displayed a specific association with attention to negative information in the univariate analyses. 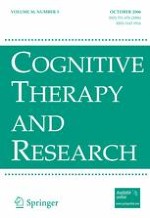 Worry, Optimism, and Expectations as Predictors of Anxiety and Performance in the First Year of Law School

The Effect of Mental Health Problems on Children’s Ability to Discriminate Amongst Thoughts, Feelings and Behaviours

Fear of Blushing: The Role of the Expected Influence of Displaying a Blush on Others’ Judgements