The goal of this pilot study was to assess the efficacy of a cognitive–behavioral program in reducing cognitive distortions and schemas in prison inmates. The Angry Cognitions Scale and the Young Schema Questionnaire was answered by a treatment and control group, and the treatment effects were tested using ANCOVA with baseline as covariate and condition as fixed factor. In order to assess clinical change, the Reliable Change Index was computed. At baseline, no differences were found between groups, except for one subscale of the Angry Cognitions Scale (Maladaptive Processes), where controls scored higher than treatment subjects. ANCOVA showed significant differences between groups at post-treatment, with treatment subjects presenting lower scores on the studied variables. Concerning clinical change, differences between groups were observed in the distributions by change categories in the majority of the variables. These outcomes offer preliminary evidence of the program’s ability to change cognitive variables underlying antisocial behavior. 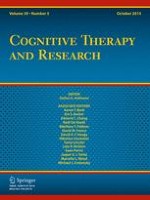 A Feeling You Can’t Let Go: Temporal Stability and Vulnerability to Thought–Shape Fusion in Eating Disorders

The Relationship Between Anxiety Sensitivity and Posttraumatic Stress Disorder: What is the Impact of Nicotine Withdrawal?

Child Anxiety and the Processing of Ambiguity