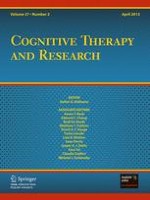 Egocentric Perceptions of the Environment in Primary, but not Secondary, Psychopathy

From Higher-Order to Underlying Constructs: Examining the Relationships Between Affect and Fundamental Fears

Interpretation of Ambiguity in Individuals with Obsessive-Compulsive Symptoms