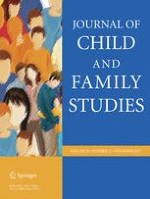 Self-Report Measures of Parental Self-Efficacy: A Systematic Review of the Current Literature

Problematic Facebook Use in Adolescents: Associations with Parental Attachment and Alienation to Peers