Childhood maltreatment is a key social determinant that potentially results in long-lasting psychological consequences in adulthood. This study examined the link between childhood maltreatment (i.e., physical abuse, sexual abuse, and exposure to violence) and psychological distress (i.e., depression and anxiety) among Asian-American women. The moderating effect of perceived discrimination on the association was also investigated. This study utilized self-reported data from 1022 Asian-American women aged 18–65 (Mage = 38.51) who participated in the National Latino and Asian American Survey. A series of multivariate logistic regressions were conducted to detect the association between childhood maltreatment, sociodemographics and acculturation, and psychological distress for Asian-American women. Results indicated that Asian women who experienced sexual abuse and were exposed to violence during childhood had a significantly greater likelihood of both depressive and anxiety disorders, while childhood physical abuse was significantly associated with a depressive disorder, but not an anxiety disorder (Model 1). In Model 2, marital status and perceived discrimination were significant determinants of psychological distress. Respondents who were never married had a greater likelihood of depression compared to those who were married or cohabited. Also, women who perceived discrimination were more likely to have both depressive and anxiety disorders. In Model 3, perceived discrimination was a significant moderator on the association between exposure to violence and an anxiety disorder. From a clinical perspective, identifying the effects of social determinants on mental health disorders and providing proper services and intervention can be key to improving an individual’s well-being and social stability.
vorige artikel Generalization of an Early Intervention for Inhibited Preschoolers to the Classroom Setting
volgende artikel Parental Mental Illness and the Transition to College: Coping, Psychological Adjustment, and Parent–Child Relationships 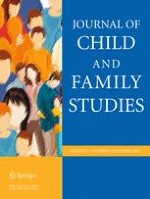 Parents’ Perceptions of their Acceptance and Rejection Behaviors: Benchmarking Spain and Ecuador

How Do Children Make Sense of their Parent’s Mental Health Difficulties: A Meta-Synthesis