» Toegang tot de volledige tekst krijgen
This study examined the differential developmental significance of multiple domains of peer reputation in childhood for current and future competence and symptoms. Participants were 205 children from a normative school cohort who completed assessments in grades 3–6 and then again 10 years later. Through re-analysis of original data from the Revised Class Play (RCP; N=612), new narrow-band subscales were examined as distinct correlates and predictors of competence in age-relevant developmental tasks and psychological well being as indexed by internalizing symptoms. Findings support the differentiation of peer exclusion, withdrawal, and sadness within the broad sensitive-isolated domain of reputation, as well as the distinctive meaning of reputations for Popularity-Leadership and Prosocial Behavior within the broad Sociable-Leader domain. When the Sensitive-Isolated predictors were considered, academic and job competence at the 10-year follow-up were predicted uniquely and negatively by peer exclusion, problems in the social and romantic domains were predicted distinctively by withdrawal from peers, and internalizing symptoms were uniquely predicted by childhood reputation as Sad-Sensitive. When the Sociable-Leader predictors were considered, academic and (for ethnic minority youth) job success was predicted by a Prosocial reputation, social success was forecasted by Popularity-Leadership, and romantic competence was predicted positively by Popularity-Leadership and negatively by Prosocial reputation. Negative academic and job outcomes were also predicted by a childhood reputation as Aggressive-Disruptive. Results are discussed in relation to conceptualizing and measuring peer social competence and its relation to later adaptation. 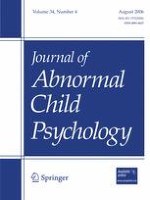 Differential Effectiveness of Behavioral Parent-Training and Cognitive-Behavioral Therapy for Antisocial Youth: A Meta-Analysis