The Child Behavior Checklist (CBCL) is a widely used questionnaire to assess behavioral and emotional problems. It is often used as a diagnostic screener, but autism spectrum disorders (ASD) are not included in the CBCL for school-aged children. This study investigated patterns of CBCL scores in 108 children with high-functioning ASD from two independent samples, and 67 IQ- and age-matched controls. Scores on the CBCL Thought and Social Problems scales significantly differentiated children with ASD from controls. Both independent ASD samples had the same pattern of elevations, with mean scores over two standard deviations above the mean for Social, Thought, and Attention Problems. The Withdrawn/Depressed scale was elevated to at least the borderline clinical range for half of the ASD sample. This pattern of elevations is consistent with two prior studies of the CBCL with school-aged children with ASD, and therefore may warrant follow-up assessment to rule out an ASD.
vorige artikel Using the ASEBA to Screen for Callous Unemotional Traits in Early Childhood: Factor Structure, Temporal Stability, and Utility
volgende artikel Examining the Psychometric Properties of the Family Accommodation Scale-Parent-Report (FAS-PR) 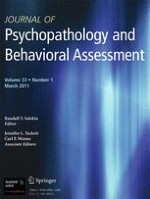 The Latent Structure of Youth Responses to Peer Provocation

Publication Opportunity in the Journal of Psychopathology and Behavioral Assessment

An Examination of the Factor, Convergent, and Discriminant Validity of the Behavioral Inhibition System and Behavioral Activation System Scales

Emotional Intelligence in Social Phobia and Other Anxiety Disorders