Increased ruminative style of thought has been well documented in borderline personality disorder (BPD); however, less is known about how the content of rumination relates to domains of BPD features. Relationships between forms of rumination and BPD features were examined in an undergraduate sample with a wide range of BPD features. Participants completed self-report measures of rumination and a free-writing task about their repetitive thought. Rumination on specific themes, including anger rumination, depressive brooding, rumination on interpersonal situations, anxious rumination, and stress-reactive rumination were significantly associated with most BPD features after controlling for general rumination. Coded writing samples suggested that BPD features are associated with repetitive thought that is negative in valence, difficult to control, prolonged, unhelpful, and unresolved. Although rumination is often described as a form of self-focused attention, BPD relationship difficulties were correlated with greater other-focus in the writing samples, which may reflect more interpersonal themes. Across both self-reports and the writing task, the BPD feature of self-destructive behavior was associated specifically with anger and hostility, suggesting this content may play a particularly important role in fueling impulsive behavior. These findings suggest that both the style and the content of repetitive thought may play a role in BPD features.
vorige artikel The Effectiveness of the MMPI-2-RF in Detecting Feigned Mental Disorders and Cognitive Deficits: a Meta-Analysis
volgende artikel Delivering Parent-Teen Therapy for ADHD through Videoconferencing: a Preliminary Investigation 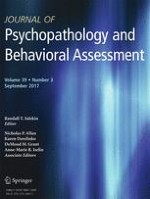 The Effectiveness of the MMPI-2-RF in Detecting Feigned Mental Disorders and Cognitive Deficits: a Meta-Analysis