We examined whether exiting high school was associated with alterations in rates of change in autism symptoms and maladaptive behaviors. Participants were 242 youth with ASD who had recently exited the school system and were part of our larger longitudinal study; data were collected at five time points over nearly 10 years. Results indicated overall improvement of autism symptoms and internalized behaviors over the study period, but slowing rates of improvement after exit. Youth who did not have an intellectual disability evidenced the greatest slowing in improvement. Lower family income was associated with less improvement. Our findings suggest that adult day activities may not be as intellectually stimulating as educational activities in school, reflected by less phenotypic improvement after exit.
vorige artikel Maternal Infection Requiring Hospitalization During Pregnancy and Autism Spectrum Disorders
volgende artikel Randomized Controlled Trial of the Focus Parent Training for Toddlers with Autism: 1-Year Outcome 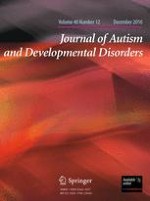 Fred R. Volkmar and Lisa A. Wiesner: A Practical Guide to Autism: What Every Parent, Family Member and Teacher Needs to Know

Examining the Quality of IEPs for Young Children with Autism