This longitudinal study assessed the changes in drug use patterns and health-related quality of life (HRQL) among HIV-positive drug users in the first methadone maintenance treatment (MMT) cohort in Vietnam.

MMT response rate after 9 months was 89.9%. Rates of positive heroin urine tests rapidly decreased at the first trimester (18.1%) and then stabilized during the next 2 trimesters (11.8 and 14.4%). Among patients with continued drug use, frequency of use decreased from 3.4 to 0.7 time/day. Improvements in HRQL were large over the course of the study and highest in the psychological domain. Adjusting for propensity score in GEE models, ongoing heroin use during MMT resulted in large decrements in all HRQL domains.

MMT improved the outcomes of treatment for drug users in ways that might facilitate success of antiretroviral therapy. Integrating MMT to HIV care and treatment services could be beneficial in injection-driven HIV epidemics in resource-scare settings.
vorige artikel Assessment of the psychological burden associated with pruritus in hemodialysis patients using the kidney disease quality of life short form
volgende artikel Can quality or quality-of-life be defined? 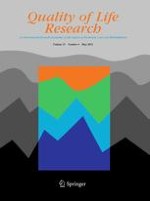 Reliability and validity of the Portuguese version of the Stroke Impact Scale 2.0 (SIS 2.0)