Changes in demographics, treatment and outcomes in a consecutive cohort who underwent transcatheter aortic valve implantation between 2005 and 2020 | mijn-bsl Skip to main content
ZOEKEN MENU 1 2 3 4

Transcatheter aortic valve implantation (TAVI) has matured to the treatment of choice for most patients with aortic stenosis (AS). We sought to identify trends in patient and procedural characteristics, and clinical outcomes in all patients who underwent TAVI between 2005 and 2020.

Since the first transcatheter aortic valve implantation (TAVI) was performed in a patient with aortic stenosis (AS) at prohibitive surgical risk in 2002, TAVI has evolved into a standardised minimally invasive treatment for high-risk patients [1‐3]. Expanding operator experience, improvements in catheter and valve design and progress in peri-procedural patient care have contributed to improved outcomes and have been followed by further simplification of the TAVI pathway (i.e. post-procedural monitoring and recovery on the cardiology ward in lieu of the intensive care unit, early mobilisation and early discharge) [4‐7].
As randomised controlled trials (RCTs) showed equivalence between TAVI and surgical aortic valve replacement (SAVR), the European Society of Cardiology updated the guidelines in 2017 by expanding indications for TAVI in patients at intermediate surgical risk [8]. Importantly, a recent RCT showed transfemoral TAVI to be superior to SAVR in low-risk patients [9].
In the context of the above, we sought to analyse whether this development had an impact on the patients that we accepted and treated for TAVI in conjunction with in-hospital outcomes and survival post-discharge of the first 1500 patients that underwent TAVI in our institution between 2005 and 2020.

The study population comprised the first 1500 patients with AS (including 15 patients with aortic regurgitation more severe than stenosis) who underwent TAVI between November 2005 and April 2020 at the Erasmus University Medical Centre (Erasmus MC), Rotterdam, The Netherlands. Patient selection and treatment strategy was based on clinical (i.e. age, comorbidities, surgical risk) and anatomical characteristics (access-site suitability) in the context of available valve technology per studied time period. Self-expanding valves were primarily used during the start-up phase in 2005–2007, after which self-expanding, balloon-expandable and mechanically expanded (the last-mentioned since 2013) devices were used in more recent phases of the TAVI programme. In the initial period (November 2005–October 2010), the final treatment decision was based on arbitrary case discussions primarily between an interventional cardiologist and a thoracic surgeon, complemented with a radiologist with valvular access and closure expertise. From October 2010, patient eligibility for TAVI, choice of treatment and strategy were decided during a structured weekly meeting of a multidisciplinary heart team consisting of an interventional cardiologist, a cardiac surgeon, a cardiac anaesthetist and an imaging cardiologist [10]. From October 2013, all patients with AS evaluated at the outpatient cardiology clinic were also seen by the geriatrician, who assessed specific pre-defined geriatric domains such as physical function, frailty and cognitive status. This was done in the framework of the TAVI Care & Cure clinical research project and programme, the details of which have been described before [11]. A diagnosis of delirium was based on geriatric assessment as described previously [12]. All other endpoint definitions are in accordance with VARC‑2 criteria [13].
The study has been reviewed and approved by the ethics committee of the Erasmus MC (MEC-2014-277) and was conducted according to the Erasmus MC regulations for appropriate use of data in patient-oriented research and the privacy policy of the Erasmus MC. Data on mortality after hospital discharge were collected via the Dutch Civil Registry.

For the assessment of changes in patient demographics and clinical outcomes, the study population of 1500 patients was categorised into three chronological tertiles of 500 patients each. Tertile 1 (T1) included all TAVI procedures performed between November 2005 and December 2014; tertile 2 (T2) included patients treated between January 2015 and May 2018, while tertile 3 (T3) included patients treated between June 2018 and April 2020.
Continuous variables are presented as mean ± standard deviation or median with interquartile range, and differences between the three tertiles were analysed by one-way ANOVA or Kruskal-Wallis test, as appropriate. Categorical variables are presented as numbers and percentages and were analysed by chi-square test or Fisher’s exact test, as appropriate. One-year survival was studied with the Kaplan-Meier method; the log-rank test was used to evaluate differences between tertiles. Results are assumed to be statistically significant if p < 0.05. All data were analysed with SPSS software (SPSS Version 25; IBM Corp., Armonk, NY, USA).

The study results (baseline characteristics, procedural details, in-hospital outcomes and mortality at 30 days) are summarised in Tab. 1, 2 and 3. The first 500 patients were treated in the first 9 years and 2 months (November 2005–December 2014), while the next two cohorts of 500 patients were treated in the following 3 years and 5 months (January 2015–May 2018) and 1 year and 10 months (June 2018–March 2020). In other words, it took almost 10 years to include the first 500 patients but only 3.5 years and less than 2.0 years for the subsequent cohorts.
Table 1
Demographics and baseline characteristics
LBBB Left bundle branch block, RBBB right bundle branch block, IQR interquartile range, NYHA New York Heart Association, STS Society of Thoracic Surgeons, AR aortic regurgitation, AS aortic stenosis, MR mitral regurgitation, TAVI transcatheter aortic valve implantation
Data not available in a121 patients, b121 patients, c170 patients and d149 patients
Table 2
Procedural characteristics
PCI Percutaneous coronary intervention, SAVR surgical aortic valve replacement, IQR interquartile range
aDue to missing data (≤ 6 cases), totals may not add up to 1500/500
bIncludes: Medtronic CoreValve, Evolut R, Evolut Pro, Symetis Acurate, Edwards Centera, JenaValve and St Jude Medical Portico
cIncludes: LOTUS, LOTUS Edge and LOTUS Depth Guard (Boston Scientific)
dIncludes: Edwards XT and Edwards Sapien 3
Table 3
Clinical outcomes
AV atrioventricular, IQR interquartile range, AR aortic regurgitation, MR mitral regurgitation
aNo percentage since cohort 3 did not complete the full 1‑year follow-up
bNo percentage since cohorts 2 and 3 did not complete the full 3‑year follow-up
cPercentage is based on number of patients with new pacemaker divided by number of patients without a pacemaker at baseline
dData not available in approximately one-third of the total cohort
While age and gender did not change from T1 to T3 (80, 80 and 79 years and 53%, 55% and 52% male gender, respectively), the patient’s baseline risk (i.e. Society of Thoracic Surgeons (STS) risk score) dropped from 4.5% to 2.7% (p < 0.001) due to a progressive decline in the prevalence of antecedent cardiovascular disease (i.e. myocardial infarction, coronary bypass surgery and peripheral artery disease) (Electronic Supplementary Material, Fig. S1). In addition, the aortic valve area at discharge increased significantly over time (1.60–2.00 cm2, p < 0.001). There was a slight, but significant, increase in the prevalence of atrial fibrillation (31%–35%). The prevalence of hypertension and renal failure fluctuated.
With respect to the TAVI procedure, general anaesthesia was virtually eliminated (100%, 24% and 1% from T1 to T3). Transfemoral TAVI remained the default approach (87%, 94% and 92%) with subclavian being the most common alternative (1%, 0% and 7%) (Electronic Supplementary Material, Fig. S2). Also, there was a decrease in the use of balloon pre-dilatation (from 84% to 25%, p < 0.001), albeit with a higher overall need for balloon post-dilatation (19%–30%, p < 0.001). Initially, the self-expanding prosthesis CoreValve (Medtronic, Minneapolis, MN, USA) was the only valve used (later replaced by the Evolut R and Evolut PRO). In 2007, the balloon-expandable Edwards Sapien3 valve (Edwards Lifesciences, Irvine, CA, USA) was introduced into our programme, followed by the mechanically expanded LOTUS valve (Boston Scientific, Marlborough, MA, USA) in 2013. Vascular closure was predominantly performed surgically in T1 (78%), while a fully percutaneous approach was used in T3 (97%, p < 0.001). Following its introduction in 2013, the use of filter-based cerebral embolic protection (CEP) increased from 26% to 43% (p = 0.001). Overall, the median procedure time and contrast volume reduced significantly (186, 114 and 56 min and 120, 100 and 80 ml, respectively). With respect to outcomes, the frequency of 30-day all-cause mortality (7%, 4% and 2%), all stroke (7%, 3% and 3%), new pacemaker implantation (19%, 22% and 8%) and delirium (17%, 12% and 8%) improved significantly. The frequency of major bleeding and vascular complications did not change over time (both approximately 9%, 6% and 6% over the entire study period). One-year survival increased significantly from T1 to T3 (Fig. 1).
×

The objective was to report changes in baseline characteristics of patients treated with TAVI since the initiation of our programme in 2005. In addition, we have reported changes in the procedure and also reported on in-hospital outcome and 1‑year mortality. With respect to the primary objective, observational bias may have played a role, in particular in the period before the start of the TAVI Care & Cure project. The latter was characterised by the collection of pre-defined variables related to patient characteristics and outcomes via a study protocol approved by the medical ethics committee. Observation bias may also have played a role in the in-hospital outcomes but not in the assessment of mortality, including during follow-up, for which the Dutch Civil Registry was used. The main limitation may be the tertiary referral nature of our institution (generalisability) and the fact that we cannot directly relate outcomes to changes in patient-related, procedure-related or operator-related factors (time bias). With the simplification of the TAVI pathway and a reduction in complication risks, total hospital admission times likely declined over time, although the data confirming this hypothesis were incomplete in this study.

We found that since the initiation of TAVI at our institution in 2005, the age of patients treated with TAVI did not change. Yet, their baseline risk profile improved mainly because of fewer antecedent cardiovascular diseases. Therefore, the patients treated with TAVI remain primarily octogenarians but at intermediate surgical risk. TAVI was associated with significant improvement of outcomes and 1‑year survival. Bleeding and vascular complications as well as the need for a pacemaker remain the Achilles’ heel of TAVI.

J. Daemen received institutional research support from Abbott Vascular, Boston Scientific, Medtronic, Pie Medical and PulseCath BV, and consultancy and speaker fees from Boston Scientific, ReCor, Pie Medical, Medtronic and PulseCath BV. N.M.D.A. Van Mieghem received research grants and advisory fees from Abbott, Boston Scientific, Edwards, Teleflex, Medtronic, PulseCath BV, Daiichi Sankyo and Abiomed. M.J.A.G. De Ronde-Tillmans, R.M. Nuis, J.A. Goudzwaard, P.A. Cummins, T.W. Hokken, M.P.H. van Wiechen, J.F.W. Ooms, F.U.S. Mattace-Raso, M.J. Lenzen and P.P.T. de Jaegere declare that they have no competing interests.
Open Access This article is licensed under a Creative Commons Attribution 4.0 International License, which permits use, sharing, adaptation, distribution and reproduction in any medium or format, as long as you give appropriate credit to the original author(s) and the source, provide a link to the Creative Commons licence, and indicate if changes were made. The images or other third party material in this article are included in the article’s Creative Commons licence, unless indicated otherwise in a credit line to the material. If material is not included in the article’s Creative Commons licence and your intended use is not permitted by statutory regulation or exceeds the permitted use, you will need to obtain permission directly from the copyright holder. To view a copy of this licence, visit http://​creativecommons.​org/​licenses/​by/​4.​0/​.
vorige artikel Introduction of a new scoring tool to identify clinically stable heart failure patients
volgende artikel Decision making in treatment of symptomatic severe aortic stenosis: a survey study in Dutch heart centres
insite
INHOUD
share
DELEN 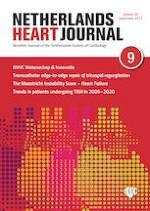 Percutaneous valve in all four positions

Transcatheter edge-to-edge repair of tricuspid regurgitation in the Netherlands: state of the art and future perspectives