With the increase in international adoptions during the last decade, many researchers have investigated the developmental outcomes of these adoptees, including their extreme behaviors. Collectively, these results have not always appeared consistent across studies, perhaps because studies have used children reared in institutions or not, the institutional environments vary in severity, children spend different lengths of time in the institution and are assessed at different ages, and studies use different outcome measures. In an attempt to discern more order in the literature, this review focuses on 18 studies, each of which used the Child Behavior Checklist, and their outcomes are viewed with respect to these parameters. Results suggest that the major factor contributing to extreme behaviors is age at adoption, with those adopted after 6/18 months having more behavior problems, especially Internalizing, Externalizing, and Attention problems. Generally, samples of post-institutional children have more problems than samples of mixed or non-institutional internationally adopted children, and some problems are more likely to be manifest in adolescence, suggesting the effects of deficient early experiences are not simply the persistence of learned behavior but more general dispositions that become more noticeable or severe during adolescence. Findings are discussed in terms of early deficient social–emotional caregiver–child interactions that characterize most institutional environments as a possible major cause of later difficulties in post-institutionalized children.
vorige artikel The Importance of Friendship for Youth with Attention-Deficit/Hyperactivity Disorder 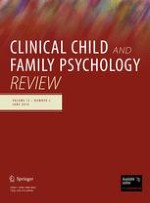 The Metacognitive Model of Generalized Anxiety Disorder in Children and Adolescents

The Importance of Friendship for Youth with Attention-Deficit/Hyperactivity Disorder

The Role of Verbal Threat Information in the Development of Childhood Fear. “Beware the Jabberwock!”