J.G. is a 13-year-old boy diagnosed in February 1999 when he was 4 years 6 months with “high functioning autism” (HFA) at an Autism Spectrum Disorders Clinic of a Child and Family Mental Health Service, by a consultant and senior lecture in child and adolescent psychiatry. The assessment was conducted by a pediatrician and an educational psychologist. In addition J.G. had “four out of nine features of inattention, five of five features of hyperactivity, and four of four features of impulsivity on the diagnostic checklist. He therefore had Attention and Hyperactivity Disorder (ADHD) according to the US criteria, but not according to the more stringent British criteria. At diagnosis, medication for ADHD was deemed inappropriate for his age and his mother has since refused for him to commence medication. When examined in 2005 at age 10 his receptive vocabulary (Dunn et al. 1997) was 96 and his nonverbal IQ (Raven et al. 1992) 106. Despite his average IQ J.G. is not able to function in a mainstream school. …
vorige artikel Brief Report: Information Processing Speed is Intact in Autism but not Correlated with Measured Intelligence
volgende artikel Kenneth Aitken: Dietary Interventions in Autism Spectrum Disorders: Why They Work When They do, Why They Don’t When They Don’t 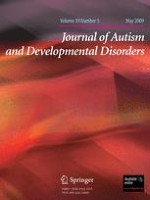 Kenneth Aitken: Dietary Interventions in Autism Spectrum Disorders: Why They Work When They do, Why They Don’t When They Don’t

JADD Announcements for May 2009

Assessment of Physical Self-Concept in Adolescents with Intellectual Disability: Content and Factor Validity of the Very Short Form of the Physical Self-Inventory