» Toegang tot de volledige tekst krijgen
Many self-report measures include some items worded in the direction opposite to that of other items. These so-called reverse-worded (RW) items can reduce the reliability and validity of a scale, and frequently form a separate method factor that does not appear to be substantively meaningful. One possible explanation for factors defined by RW items is respondent carelessness. The purpose of the present study was to evaluate whether relatively few careless responders to RW items can influence confirmatory-factor-analysis model fit enough that researchers would likely reject a one-factor model for a unidimensional scale. Results based on simulations indicated that if at least about 10% of participants respond to RW items carelessly, researchers are likely to reject a one-factor model for a unidimensional scale. 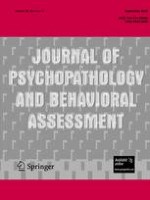 Detection of Feigned Posttraumatic Stress Disorder: A Comparison of the MMPI-2 and PAI

Severity of Self-Reported Depression in Patients with a Schizoaffective Disorder