Cardiovascular risk management of hypertension and hypercholesterolaemia in the Netherlands: from unifactorial to multifactorial approach | mijn-bsl Skip to main content
ZOEKEN MENU 1 2 3 4

About 30 years ago, the first Dutch unifactorial guidelines on hypertension and hypercholesterolaemia were developed. These guidelines have been revised several times, often after publication of landmark studies on new generations of drugs. In 1978, cut-off points for pharmacological treatment of hypertension were based on diastolic blood pressure values ≥115 mmHg, and in 2000 they were lowered to >100 mmHg. From 1997 onwards, cut-off points for systolic blood pressure values >180 mmHg were introduced, which became leading. In 1987, cut-offs for hypercholesterolaemia of ≥8 mmol/l were set and from 2006 pharmacological treatment was based on a total/HDL cholesterol ratio >8. Around 2000, treatment decisions for hypertension and/or hypercholesterolaemia were no longer based on high levels of individual risk factors, but on a multifactorial approach based on total risk of cardiovascular diseases (CVD), determined by a risk function. In the 2006 multidisciplinary guideline on cardiovascular risk management, the Framingham risk tables were replaced by European SCORE risk charts. A cut-off point of 10% CVD mortality was set in the Netherlands. In 2011, this cut-off point changed to 20% fatal plus nonfatal CVD risk. Nowadays, ‘the lower the risk factors, the lower the absolute risk’ is the leading paradigm in CVD prevention.
vorige artikel Self-reported versus ‘true’ adherence in heart failure patients: a study using the Medication Event Monitoring System
volgende artikel Precordial R-wave reappearance predicting infarct size and myocardial recovery after acute STEMI 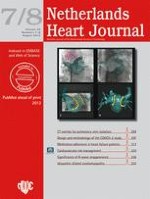 Design and methodology of the COACH-2 (Comparative study on guideline adherence and patient compliance in heart failure patients) study: HF clinics versus primary care in stable patients on optimal therapy

Right side or left side: an inconspicuous masquerade