» Naar de samenvatting
Several studies have already established the superiority of cardiac resynchronisation therapy (CRT)-defibrillator (D) over implantable cardioverter-defibrillator (ICD) alone in patients with severely symptomatic chronic heart failure (New York Heart Association (NYHA) class III/IV), left ventricular (LV) systolic dysfunction, and a wide QRS complex. Synchronous pacing of opposing LV walls in malfunctioning asynchronously contracting LV regions creates resynchronisation with restoration of LV motion dynamics. In the Multicenter Automatic Defibrillator Implantation Trial-CRT (MADIT-CRT) study, a reduction in mortality or hospitalisation for congestive heart failure with CRT-D was observed compared with ICD. However, no difference in mortality was noted between the two groups. The COMPANION study established the superiority of CRT-D over optimal medical management alone in reducing all-cause mortality patients with NYHA class III/IV symptoms. While improvements in LV dimensions with CRT in patients with mildly asymptomatic heart failure were observed in the MIRACLE ICD-II and REVERSE trials, there were no significant differences in clinical endpoints in these studies. The MADIT-CRT study showed a significant reduction in the composite endpoint of mortality or heart failure events in similar patients with NYHA class I/II symptoms over a mean follow-up of 2 years. However, no significant difference in all-cause mortality between the two groups was noted.
At the November 2010 meeting of the AHA in Chicago, the results of the Resynchronization–Defibrillation for Ambulatory Heart Failure Trial (RAFT) study were presented by Dr. Anthony Tang, Ottawa, Canada and recently published in the New England Journal of Medicine [ 1]. In the RAFT study, the safety and efficacy of CRT-D compared with ICD alone were investigated in patients with NYHA class II/III, LV systolic dysfunction (left ventricular ejection fraction (LVEF), ≤30%), and a wide QRS complex. All patients had been scheduled for ICD implantation for primary or secondary prevention of sudden cardiac death. The primary endpoint of the study was all-cause mortality or hospitalisation for worsening congestive heart failure. A total of 1798 patients (mean age, 66 years; 17% women) were randomised to either CRT-D ( n = 894) or to ICD alone ( n = 904). Two thirds of the patients had ischaemic cardiomyopathy. The majority of patients (80%) had NYHA class II and a mean LVEF of 22%. Permanent atrial fibrillation or flutter was seen in 13% of the patients. Patients were optimally treated, and the mean duration of follow-up was 40 months. Medtronic transvenous devices and leads were used in both groups. The LV lead was positioned in the lateral or posterolateral walls. Programming was set to minimise right ventricular pacing in the ICD arm and to maximise biventricular pacing in the CRT-D arm. The mean nonpaced QRS complex was 158 ms, and the mean paced QRS complex was 208 ms. A left bundle branch block (LBBB) pattern was noted in 72% of the patients. An LV lead was successfully placed in 95% of the patients in the CRT-D arm, and there was a 10% crossover to the CRT-D arm from the ICD arm.
The main results of the RAFT study showed that the primary endpoint of all-cause mortality or hospitalisation for heart failure was significantly reduced in the CRT-D arm compared with ICD (40.3% versus 33.2%, p < 0.001). All-cause mortality was also significantly decreased (26.1% versus 20.8%, p = 0.003). This corresponded to a number needed to treat of 14 patients for 5 years to prevent one death with CRT-D compared with ICD alone. Hospitalisation for congestive heart failure was similarly reduced (26.1% versus 19.5%, p < 0.001). Results for the primary and secondary endpoints were similar for NYHA class II or III patients. Subgroup analysis showed a greater benefit with CRT-D in patients with wider QRS complex at baseline (≥150 ms for native and ≥200 ms for paced). LBBB morphology also seemed to derive greater benefit, and there was a trend towards greater efficacy in women. However, device-related hospitalisations were higher in the CRT-D arm (20.0% versus 12.2%, p < 0.001). Device- or implantation-related complications were significantly higher in the CRT-D arm, as compared with the ICD arm at 30 days (13.3% versus 6.8%, p < 0.001). The complications included haemothorax or pneumothorax, device-pocket haematomas, device-pocket infections, and lead displacement requiring intervention.
The results of the RAFT study clearly indicate that in patients with NYHA class II/III (80% class II!), LV systolic dysfunction (LVEF, <30%), and a wide QRS complex, the addition of CRT to an ICD reduces all-cause mortality and hospitalisation for congestive heart failure by about 25%. On subgroup analysis, the results of the primary endpoint seemed to be more outspoken in patients with a wider QRS complex at baseline and those with LBBB morphology. There was a significant increase (twofold!) in the risk of device- or procedure-related complications at 30 days in the CRT-D arm, including a higher risk of hospitalisation for device-related causes. The higher complication rates in the RAFT trial are similar to those noted by other CRT-D trials, and careful attention to complications is therefore essential. Further studies are needed to identify optimal LV lead placement for maximal benefit and the cost-effectiveness of extending CRT-D to mildly symptomatic patients. In an accompanying editorial, Dr. Arthur Moss (Rochester, NY, USA) stated, ‘we can say that recent findings documenting the use of CRT in preventing heart failure in minimally symptomatic patients are breathtaking’ [ 2]. 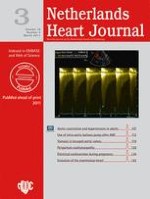 Frits L. Meijler; a scientific career chasing his holy grail: the function of the AV node