The heart is regularly involved in metastatic neoplasms with cardiac metastases being found in up to 20 % of autopsies. We present a case about a 42-year-old Caucasian female with a fatal metastatic melanoma to the heart. The five- year survival rate for stage IV melanoma (melanoma with metastases to other organs) is 15 to 20 %. If patients with malignant melanoma present with new onset of cardiac symptoms, clinicians should always be aware of the possibility of cardiac metastases and perform further investigations.

The heart is regularly involved in metastatic neoplasms [1‐3] with cardiac metastases found in 6–20 % of autopsies [4, 5]. Malignant melanoma is responsible for 4.4 % of these cardiac metastases; other causes are lymphoma, sarcoma and leukaemia [6]. Cardiac metastasis is a late manifestation of disseminated disease and can cause dysrhythmia, myocardial dysfunction, pericardial effusion, heart failure or right ventricular obstruction. Autopsies in melanoma have demonstrated cardiac metastases in up to 65 % of the cases [7, 8].

A 42-year-old Caucasian woman, who had lived in Africa for 3 years, presented herself in the Emergency Department. She reported shortness of breath on mild exertion during the last few weeks, a swollen face, abdominal pain and oedema in the legs.
Her medical history disclosed a malignant melanoma on the right shoulder 4 years earlier. The tumour had a Breslow thickness of 5 mm (Clark level 5 with satellite lesions) and was radically excised and consequently re-excised with a margin of 2 cm. During re-excision a sentinel node procedure was performed without metastasis. An enlarged lymph node was noticed at the right side of the neck during follow-up, which contained melanoma cells at cytological examination. Since no dissemination could be demonstrated elsewhere, a lymph node dissection of the right neck (level 2a, 3, 4 and 5) was performed 11 months after the first excision. One lymph node tested positive for metastatic melanoma. She had been free of symptoms since the dissection.
Physical examination of the lungs was unremarkable. Heart sounds were muffled, without murmurs. Extremities showed a normal arterial circulation; however, both ankles demonstrated oedema. There were no signs of ascites or splenohepatomegaly. The most remarkable laboratory examinations were a haemoglobin level of 6.2 mmol/l (normal: 7.5–10.0 mmol/l), thrombocyte count of 59 × 109/l (normal: 150–400 × 109/l) and lactate dehydrogenase level of 1,393 U/l (normal: <450 U/l).
Abdominal ultrasonography showed a mass in the right lower abdomen, ascites, three masses in the liver and lymphadenopathy around the portal vein. CT of neck and thorax revealed a large inhomogeneously enhancing mass within the right cardiac atrium measuring 7.5 × 6.5 cm (Fig. 1). The mass protruded into the right ventricle and into the superior caval vein and showed signs of vascularisation. There was a large amount of pericardial and pleural effusion. CT of the abdomen demonstrated a mass in the right ovary and confirmed the other abnormalities demonstrated on ultrasound. It was concluded that the patient was suffering from metastases of the melanoma or from a primary gynaecological neoplasm. Diagnostic biopsy of the right adnex confirmed metastatic melanoma.
×
Due to cardiac tamponade, ultrasound-guided pericardial drainage was performed and resulted in evacuation of 700 cc of clear yellow fluid. Immunohistochemistry showed the presence of macrophages; however, malignant cells were not found. After drainage, ECG-triggered magnetic resonance imaging (MRI) of the heart was performed to characterise the cardiac mass. The intra-atrial mass showed a relatively high signal intensity on the T1 weighted black-blood images and after the injection of gadolinium contrast agent, the intra-atrial mass showed inhomogeneous enhancement. There was a large amount of pleural effusion but no residual pericardial effusion (Fig. 2) The MRI image was highly suggestive for intracardial metastasis of the melanoma due to melanotic signal intensity on T1-weigthed images.
×
Both surgery and systemic chemotherapy were considered not achievable due to the severe, worsening, condition of this patient. Therefore, palliative sedation was started and patient died 23 days after initial presentation. Autopsy was not performed.

The skin is the most common location of malignant melanoma, but it can appear in and metastasise to almost any organ. Cardiac metastasis almost never involves the initial presentation, but is mostly present after haematological spreading of the neoplasm and can appear in all four heart chambers [4]. The right atrium is mostly involved [8]. Melanotic metastasis can involve the pericardium and myocardium but the endocardial layer is rarely affected. Management of metastatic melanoma includes surgery of the affected organ (e.g. the cardiac autotransplantation procedure), radiotherapy, palliative chemotherapy, immunotherapies such as ipilimumab, tremelimumab, interferon-α or interferon-y and treatment of symptoms depending on the affected organ.
Successful palliative excisions have been described in several case reports and can prevent complications such as heart failure due to inflow and outflow obstruction of the heart chambers, as was seen in this patient [8, 9]. Long-term survival of patients with metastatic melanoma depends on response to systemic treatment, surgical resection options and pre-existent comorbidity of the patient; the 5-year survival rate for stage IV melanoma is 15 % to 20 %.
In conclusion, if patients with malignant melanoma in their medical history present with cardiac symptoms, clinicians should always consider the possibility of cardiac metastasis and perform further investigations, such as MRI, CT and/or ultrasound. Surgical options should be well considered and are primarily symptomatic in metastasised disease. 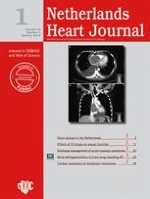 Defragmentation in ablative AF treatment: is our knowledge too fragmented?